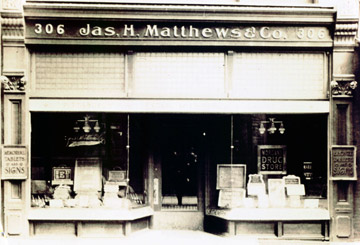 The founder of Matthews International, John Dixon Matthews, was born and lived most of his early life in Sheffield, England. Although Matthews was not formally educated, he was talented with his hands, and at an early age became an apprentice to learn the intricacies of the engraving profession. Matthews learned his trade quickly and was soon designing and making branding irons, stamps for wooden crates, and engravings for small businesses. As his apprenticeship ended, Matthews decided that his best opportunity for advancement was to establish his own engraving firm. The likelihood of achieving this goal in England was minimal, however, due to the fact that there were already many highly skilled engraving firms engaged in intense competition. As a result, Matthews traveled to the United States to establish his own company.

Matthews established his firm in Pittsburgh, Pennsylvania, a growing metropolis with a burgeoning population, and was immediately inundated with requests for identification products. Throughout the first 40 years of his business, from 1850 to 1890, his company focused on manufacturing and distributing various products including branding irons; ornate engravings; military stamping dies; and stamps for crates, packaging, and large bundles. As the company grew and prospered, revenues continued to increase at a steady pace. When John Dixon Matthews passed away during the waning years of the 19th century, his company was on the verge of a major transformation.

During the 1890s, the company established the Bronze Tablet Department, specifically intended to design and prepare patterns for bronze plaques and other items that later would be cast by other firms. Although the use of bronze in art had declined dramatically in the United States during the 19th century, the Bronze Tablet Department was convinced that there was a growing market for such items. Thus, as the company finished and detailed the castings done by other suppliers and shipped them to customers around the United States, its reputation for quality bronze workmanship began to grow. By the start of the 20th century, the company had earned a national reputation for its identification work using bronze.

The company's success continued during the early decades of the 20th century, and revenues steadily increased. Then, in 1927, the company developed a product that not only changed the direction of its business but also affected the history of what has become known as "memorialization."

In 1927 the employees at Matthews Tablet Department were approached by a family that wanted to exhibit its affection and respect for a deceased family member by commissioning an entirely bronze memorial. Matthews accepted the commission and cast the very first flush bronze memorial for a gravesite in Oaklawn Cemetery in Jacksonville, Florida. The first flush bronze memorial designed, cast, and installed in a cemetery within the United States, the piece immediately revolutionized memorialization in American cemeteries. Soon Matthews had garnered a reputation as the preeminent designer and manufacturer of flush bronze memorials for use in cemeteries, and people from across the United States began placing orders with the company.

As the company grew, its expertise in bronze memorials grew apace. The men working at Matthews were recognized as the best in the business for casting bronze for freestanding memorial sculptures. Much more preferable than stone or wood, the durability and lightness of bronze allowed Matthews a freedom of conception and design that was virtually impossible with other materials. As a natural outgrowth of its work in bronze memorialization, the most important development for the company during the 1940s, 1950s, and 1960s accompanied the rise of interest in the process of cremation.

For Matthews, the rise in cremation meant that people wanted permanent placements of the remains of their deceased loved ones. People were no longer limited in their choices for cremation memorialization because of the wide array of memorialization options that Matthews offered, including outdoor Cremorials, columbarium estates, handcrafted urns, niches, and personalized memorial plaques. By the end of the 1960s, Matthews Bronze was the country’s leading designer and manufacturer of cremation memorializations.

Matthews International has designed and cast some of the most notable bronze memorials in the United States. One of the company's highest-profile projects includes handcrafting and casting the plaques used in the Major League Baseball Hall of Fame. Matthews also cast the metal plaque situated on the top of Pike's Peak to commemorate the 100th anniversary of the composition of "America the Beautiful." Matthews has cast bronze memorialization tributes for some of the most popular celebrities in America, including Lucille Ball, Jack Benny, Humphrey Bogart, Nat King Cole, Sammy Davis, Jr., Alan Ladd, Michael Landon, Liberace, Groucho Marx, and Selena. Elvis Presley’s bronze memorial, situated on the southern end of Graceland in Memphis, Tennessee, is considered to be the most visited piece of work ever cast by Matthews, with more than 700,000 people visiting the site annually.

Matthews has also done a significant number of bronze memorials for American veterans of wars. One of the company's most recent bronze memorials included the installation of a tribute to the men and women of the 14th Quartermaster Detachment Unit at the U.S. Army Reserve Center in Greensburg, Pennsylvania, which suffered the most casualties of any unit in the entire Allied Force throughout the duration of the hostilities between the United Nations and Iraq. The memorial includes the boots, a rifle, and helmet of a fallen soldier, life-sized American soldiers cast in bronze reflecting on the fate of their fallen comrade-in-arms, and an imposing bronze eagle, which symbolizes the bravery and honor of American soldiers in battle.